The most ancient documents are the purchase deeds of XVI century on parchment that are kept in the Dubno district court fund, and two hand-written books - "Sluzhebnyk" and "Psalter" of the same period.

The main part of the archives documents is comprised of documents pertaining to the period when the region was a part of Russian Empire (1796-1917). First of all, these are the documents of local self-governments: the city council of Dubno, town councils and boards, documents of povit courts and courts of the peace, police headquarters, Land Surveying Commissions, educational establishments, where is the information about social and economic situation of the regional population, development of handicraft and trade.

Documents in these funds include acts releasing peasants from serfdom, other pertaining to their refusal to accept the Prescribed document, or to pay redeemed payment, of their participation of political movements, particularly in the Polish rebellion in 1863; there are also inspection registers of settlements of the Rivne and Korets districts. The fund of the Rivne district court contains the Official certificate of 1841 by Ignatiy Homych Tsialkovsky, the grandfather of Russian science in the sphere of aerodynamics and rocket technique K.Tsiolkovsky. The collection of religious establishments a document issued by the vice-governor of Kyiv in1846, permitting the marriage of Halaktion Korolenko and Ewelina Skurevych - the parents of Russian writer V.Korolenko. The Rivne gymnasium fund contains information about Kostomarov's and Kulish's teaching at the gymnasium, and about Korolenko's studies in Rivne real gymnasium.

The history of the religious and church establishments is represented within the funds of Volyn theological consistory, religious offices, deans' offices, and Orthodox and Roman Catholic churches.

The private fund of F. Stengel, the founder of the first regional museum in the Rivne region in the village Horodok contains documents collected for the museum.

The funds of establishments, enterprises and organizations of the Polish state period (1921-1939) include documents of district headquarters and departments, town and gmina governments, police establishments, the Rivne district court and prosecutor's office, land and financial establishments. The condition of social and political life of the Rivne region is completely represented in these documents. Fund documents of district village headquarters and their departments contain statistical information about the work of industrial enterprises, about the amount of population, schools, libraries; lists of landowners, registry book organizations, economic characteristics of districts, road maps and others. 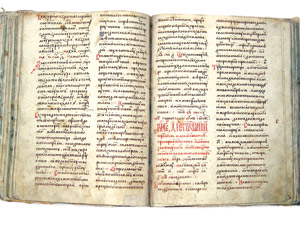 Interesting documents are found in the collections of Rivne branch of emigration syndicate (1929-1939), in the "Local Committee of Polish

Biographical Dictionary", and in the "Volyn District Government Union of Polish Teachers".

The only personal fund of Polish period is the fund of Jacob Hoffman, historian, regional ethnographer, deputy of polish Seym, head of the Volyn district government union of Polish teachers, author of "Guide-book Around Volyn", and editor of the almanac "Volyn Rechnyk". In this fund you can famaliarize yourself with Hoffman biography, diaries, ethnographic records of his speeches in Seym. Also of great interest are programmes for the studying of Polish history and polish language, manuscripts of articles about the history of political parties, reports about excavations in the Volyn region.

Information contained in documents of the WW II period and occupation of the Rivne region by Nazis (1941-1944) is used very actively in these archives.

First of all, these are documents of Rivne district government, district commissariats, Rivne burgomaster, some municipal and district governments, state employment agencies, social and political and public organizations ("District Association Prosvita"; "Ukrainian Publishing House of the Newspaper "Volyn", "Rivne Church Government" and others). 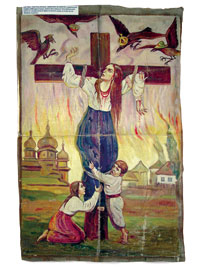 They tell us about the activity of occupied administration establishments, about their functions, about the organization of ghetto, the existence of concentration camps; they contain information about trade and industrial institutions, companies, schools, about the population and its distribution according to the age and sex, lists of inhabitants, lists of workers of different institutions; information about citizens' exporting forced labour to Germany. The investigation files of Security Service of Ukraine in the Rivne region, collection of letters from citizens exported to Germany for forced labour also tell us about the events of this period.

Among the unique documents of this period there is the "Collection of Documents of OUN-UIA (Organization of Ukrainian Nationalists-Ukrainian Insurgent Army)"; this collection contained editions of resolutions, conferences and conventions of "Great Assembly" of OUN, originals of orders, reports, reviews of various commanders of subsections of UPA "Polissya Sich" under the command of Taras Bulba-Borovets, of the group "North" under the command of Klym Savura, as well as diaries of participants of those events.

The documents of the fund of underground district committee of Comunist Party tell about partisan and underground movement in Rivne region during the WW II.

All the documents of the occupation period are declassified.

The post-war period (1944-2007) is most extensively represented in the archive. These are the documents of the executive committee of Rivne oblast councils of deputies, their departments and government; of regional executive committees of village councils, large industrial enterprises, collective farms, educational establishments and public organizations. The funds of industrial enterprises in the Rivne region, health protection institutions, education, science, culture and others are included among these documents.

The archive also contains private funds of the participants of revolution events, Rivne region participants of partisan movement of famous writers, journalists and others.

Documentary photographs in the archives reflect the main period of Rivne regional history. The largest is the collection of documentary photographs where the famous persons of region are depicted, among them outstanding workers of agriculture, social and cultural sphere, builders, delegates of convention, vaterans of work and war. There are many photos of partisan and undeground struggles in the Rivne region during the WW II (mainly photoreproductions and photoprints).

Among the phonodocuments are the recorded memories of partisans-scouts and undeground workers, releases from the information bureau about the Rivne region, reports from the "places of grand events", information about amateur artists and performers and others.